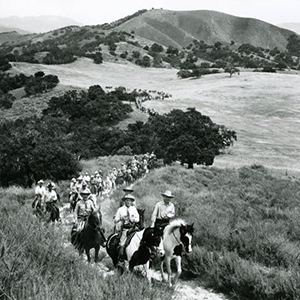 Los Rancheros Visitadores, an exclusive men’s club, which included Walk Disney, Clark Gable, and Philip K. Wrigley among its members, has operated out of the Santa Ines Valley in California since 1930. This paper investigates the social club’s emphasis on historic reenactment from its inception to 1954, and focuses on how Los Rancheros constructed and understood Californian heritage. Los Rancheros based their annual horseback rides on their understanding of a historic event—they sought to recreate the customary Spanish Californian celebratory ride after a cattle drive. They rode through the Santa Ines Valley, camping, drinking, and putting on parades for the local communities, all while adhering to the conceit that they were reenacting history.